That dwarfs the troubling 8.3 percent national unemployment rate under President Barack Obama. And while the national rate has stayed relatively flat for the past five months, the Garden State’s has risen from 9 percent in March when its previous decline stopped. If that increase were mirrored across the country, Obama’s re-election chances would be sunk by an unemployment rate a smidge below 9 percent.

All of that comes as the tough-talking, larger-than-life Christie pitches New Jersey as a model for the entire nation. The former federal prosecutor has tackled a massive state budget deficit, jousted with the teachers union, and cut payroll taxes. He inherited a state racked by 9.7 percent unemployment in February, 2010, with the recent reversal undoing the gains that occurred during his tenure and that have contributed to  his stature as a national leader.

“I’ll be talking about the New Jersey experience and what that means for the country, what it can mean and promise for the country,” Christie, 49, told ABC’s “Good Morning America” on Tuesday morning. “If the American people watch tonight and leave the speech by saying, ‘Yup, that’s him, that’s who I’ve heard about. He seems genuine to me,’ then think I will have done my job.”

Needless to say, Democrats are taking pot shots at Christie over the one metric that voters care about most: jobs. While other states such as California and Nevada have higher levels of unemployment, neither contains a politician like Christie who is expected to be the future of the GOP.

And showcasing Christie on Tuesday exposes a contradiction for Republican nominee Mitt Romney. When the July unemployment report was released earlier this month, Romney described the slight bump from 8.217 percent in June to 8.254 percent (which was rounded upward) as a “hammer blow to struggling middle-class families.”

New Jersey Policy Perspective, a regional think tank, noted that unemployment in New Jersey  has climbed over the past two months to its highest point in 35 years, while the Christie administration declares in news statements that the “long-term trend remains positive.”

“We are the laggard. And as long as we deny or ignore that, we won’t come up with policies to change that,” said Gordon MacInnes, a former Democratic state legislator who is the think tank’s president. “Politicians always tell an incomplete truth, but you want some of it to be true.”

PRIME-TIME CATAPULT?
In his keynote address, Christie plans to leave out the “Jersey comeback” line deployed in speeches earlier this year. But even if his personality or his rhetoric gets toned down, this address has the potential to catapult him into “chosen one” status for future presidential elections – as happened when then-Illinois Senate candidate Obama delivered the Democratic keynote in 2004.

So why is New Jersey’s unemployment rate now higher than when he took office?

Charles Steindel, chief economist for the New Jersey Treasury Department, told The Fiscal Times  that the state economy moves at the whim of the rest of the country. And after all, many New Jersey residents commute to jobs in New York and Pennsylvania. 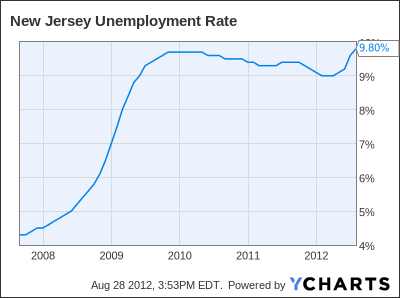 Steindel also notes that stats from the federal Bureau of Labor Statistics should not be accepted as gospel, since the numbers are adjusted seasonally and can vary dramatically over the course of revisions in the two following months. “All these numbers are pretty preliminary,” he said.

In addition, the most recent batch of bad state jobs reports are based on two conflicting surveys. The unemployment rate comes from polling households, while the jobs total is derived from a larger survey of establishments. Raw data then gets filtered through seasonal adjustments that also influence the results.

The establishment survey shows that New Jersey added 55,300 jobs since Christie assumed office in early 2010. By contrast, the more dismal household survey shows that payrolls grew by 26,376 during that same period and the ranks of the unemployed by 6,474.

“While the rise in the unemployment rate certainly raises some flags, we believe that the job count is giving the better view on what’s happening in the state’s labor market,” Steindel wrote in a government newsletter last month. “That view is clearly one of recovery.”

But regardless of which sum gets used, about 5,000 of the new jobs under Christie came from the Revel casino in Atlantic City. The $2.4 billion casino has struggled to lure in gamblers since its April opening, forcing its owners to obtain an additional $70 million in credit to maintain its operations through 2013.

Meanwhile, the state has lost jobs in the financial services sector and the pharmaceutical firm Roche will be shutting down its research and development facility in New Jersey, MacInnes said. “We’re losing out on the competition for high value-added jobs,” he said. “We’re not talking about that fact. And we need to.”